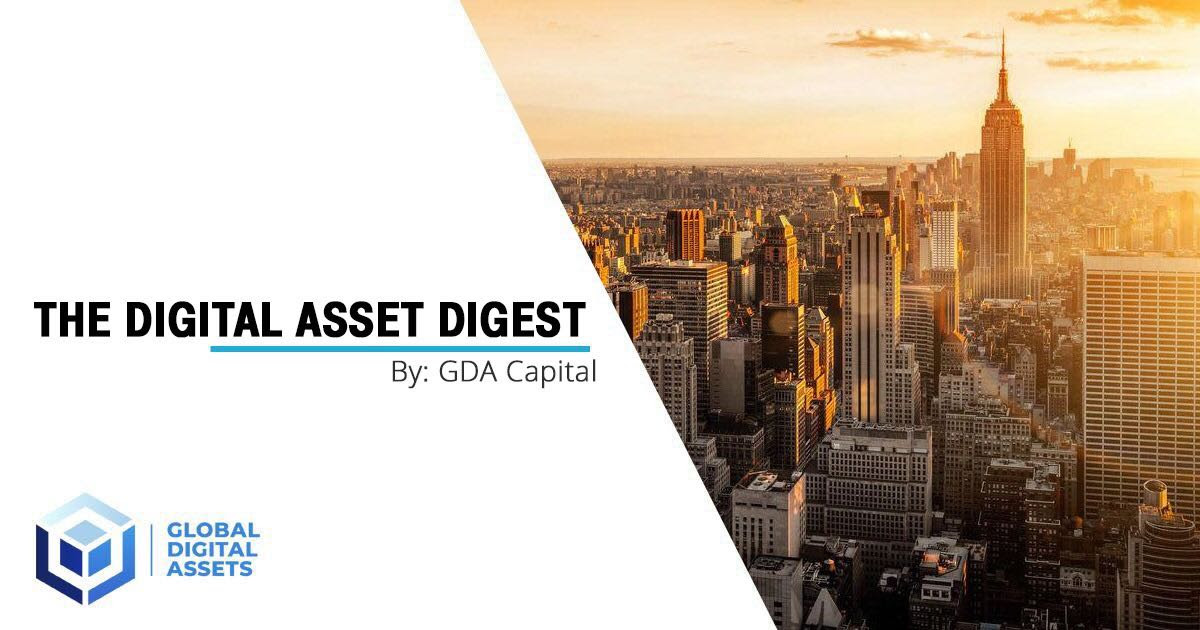 This week both the fiat and digital asset markets underwent extremely volatile trading periods, hopefully creating some lucrative opportunities in the market which we address below:

Digital Assets – Bitcoin closed at $7,110 on Friday, seeing low levels of activity as it continued its consolidation within the $6,500 to $7,500 range for the third week in a row. Ether saw comparatively higher levels of growth, closing up 8.4% for the week at $172. XRP trailed Bitcoin, ending up 1.3% over the same period.

Commodities – WTI crude closed at a staggering -$13.10 on Monday. On the heels of OPEC’s announcement that demand for crude will fall to its lowest level since 1989, coupled with the lack of storage cause from this demand drop-off, the market spoke volumes about current consumer sentiment. In other commodities news, Gold rallied earlier in the week before selling-off on Friday, closing down 1.2%.

Indices – The S&P 500 continued its rally this past week, rising 3.0% for the week as President Trump unveiled a three-stage process for states to end the coronavirus shutdown. Conversely, U.S. jobless claims rose to over 22 million for the month and China’s Q1 GDP contracted 6.8%, the first decline since the country began publishing quarterly data in 1992.

NEWS OF THE WEEK

Binance Chain releases white paper for a smart contract-enabled blockchain
Source: CoinTelegraph
“Binance Chain developers have proposed specifications for a new blockchain that would enable complex smart contract functionality within the Binance Coin (BNB) ecosystem. The specifications are available in its white paper, released on April 17… The Smart Chain will thus allow projects in the Binance ecosystem to build complex DApps based on Ethereum’s Virtual Machine. The team said that this was an often requested feature from projects in its ecosystem.”

Facebook-backed association revamps Libra following regulatory concerns
Source: TechCrunch
“The Libra Association, the consortium created by Facebook to oversee all things Libra, has updated its white paper to make some changes. The association is abandoning its original plan to create a global stablecoin directly tied to a basket of fiat currencies and securities. The Libra Association now plans to release several stablecoins — each of them will be backed by a fiat currency, such as USD, EUR, GBP or SGD. There will be a multi-currency Libra “coin,” but it won’t be a cryptocurrency per se — it’ll be a digital composite of those single-currency stablecoins.”

Grayscale now holds 1.7% of Bitcoin supply after record $500M quarter
Source: CoinTelegraph
“Almost 2% of the world’s Bitcoin (BTC) supply is now under the control of a single company: Grayscale and its Bitcoin Trust (GBTC). In its latest quarterly report on April 16, Grayscale revealed that GBTC now contains 1.7% of the circulating supply of Bitcoin. In terms of assets under management as a proportion of the total cryptocurrency market cap, Grayscale controls 1.2% of the world’s crypto… Overall, Grayscale’s ten crypto funds attracted over $500 million in investments, making it its best quarter on record.”

Enigma is a decentralized, open-source protocol specializing in privacy for DApp development. Smart contracts on traditional blockchains are public and cannot use data that must remain confidential. Enigma circumvents this issue by introducing the concept of a secret contract. The Enigma protocol does this by breaking up encrypted sensitive data and distributing it across “secret nodes” on the network. This way, nodes perform computations on seemingly random pieces of data, but never the data in its entirety, so the raw data is never exposed.

The concept behind Enigma was first described in 2015 by CEO Guy Zyskind’s MIT thesis. The firm has an ongoing R&D partnership with Intel to improve privacy preserving computation technologies using Intel SGX (Software Guard Extensions). As of today, ENG trades for $0.16 with a market capitalization of $11.7 million.

First mover: Coronavirus trillions get Bitcoiners wondering if halving still matters
Source: CoinDesk
“Before the coronavirus hit, bitcoiners were looking forward to next month’s “halving” – a once-every-four-years reduction in new supplies of the cryptocurrency – as the primary factor that would drive prices higher, potentially even a 13-fold increase from current levels. Since the coronavirus pandemic hit, however, the market’s focus has shifted instead to the trillions of dollars of emergency aid and money injections pledged by the world’s governments and central banks. Those are seen as enhancing bitcoin’s appeal as a hedge against inflation, similar to the traditional arguments for buying gold.”

Indicators on Bitcoin are neutral for the upcoming week as the cryptocurrency continues to consolidate within the $6,500 to $7,500 range. An ascending channel has clearly formed and as Bitcoin trades near the lower bound, this may be an indicator of some upwards potential. However, with the ADX near its low YTD, we find this trade uncompelling. A breakdown in the lower end of the channel may indicate a reversal and confirm our bearish sentiment from last week.

“The Web as I envisaged it, we have not seen it yet. The future is still so much bigger than the past.”
–Tim Berners-Lee

The market seems to be going green, red and everywhere in between. What is happening across commodities borders on unprecedented. However, we have never been in a situation where a natural disaster has prevented mass amounts of people from being on the road for this long, so the sell-off was expected. Like everything else, once we start to see normalcy in our lives, so to will we see it on the balance sheets and trading dashboards.

Want us to cover a specific market or digital asset? Reach out to us here.